Daniel Rose, an icon of New York City real estate, has received accolades and widespread recognition for his 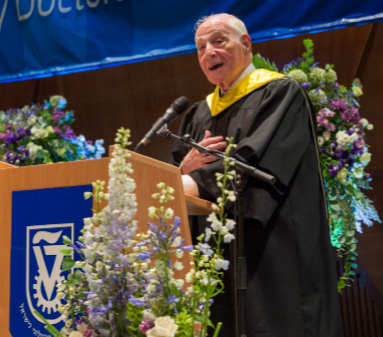 extensive philanthropic activities, including the creation of Harlem Educational Activities Fund (HEAF), the trailblazing inner-city after-school program. On June 10th this year, Mr. Rose took on the issue of U.S. criminal justice reform in a commencement address delivered at New York Theological Seminary at Sing Sing Correctional in Ossining, New York. The speech was later published in Vital Speeches. A portion of the address is reprinted here with permission from Mr. Rose.

… The zero rate of recidivism of your academic predecessors in the Theological Seminary’s Sing Sing program over the past five years, versus the 40% recidivism rate of all New York State former prisoners and some two-thirds nationally, should convince the most penny-pinching doubter that effective prison education does not “cost” but “pays.” Your eventual higher employment rates, higher incomes, and higher taxes you will pay recall the famous economic studies of the post-World War II G.I. Bill. Research revealed that to be the federal government’s best investment since the Louisiana Purchase or the acquisition of Alaska. Rand Corporation studies show that each dollar invested in successful prison education reduces incarceration costs by $4 or $5.

The transforming experience of the unique program of Professional Studies you have undergone at this “uptown branch” of the New York Theological Seminary should encourage other institutions to embark on similar demanding and ambitious activities and, we hope, will persuade legislators, churches, foundations, and private individuals to provide the necessary funding.

This formidable program, which since its inception in 1982 has served more than 350 graduates, receives no government funds; and students pay no tuition. What a huge “bang for the buck” for all contributions!

Your success in the years ahead will also stimulate the long overdue reconsideration of America’s criminal justice system compared to those of other advanced nations. The U.S. has 751 people incarcerated for each 100,000 in population, while England has 151 per 100,000; Germany has 88 and Japan has 63. Imprisonment rates have little relation to crime rates or to national well-being.

While other advanced countries focus on prevention of crime and rehabilitation of perpetrators, only the U.S. is obsessed with punishment and isolation. Other advanced nations differentiate between the bulk of the incarcerated and those–like seriously mentally disturbed or hardened career criminals—who are in separate facilities.

Throughout Europe, for example, the majority of prisoners are exposed to educational and/or vocational training programs designed to help them eventually re-enter society successfully. International recidivism rates tell the story. The recidivism rate of Norway, for example, with the best prison system, is 20%, a fraction of ours.

America’s criminal justice practices can evolve over time, if an informed citizenry demands it. Neither optimism nor pessimism is called for, only the realism reflected in an effective campaign to increase public awareness, echoing the insight of Supreme Court Justice Anthony M. Kennedy, who says, “Our resources are misspent, our punishments are too severe, our sentences too long.”

Former Attorney General Nicholas D. Katzenbach wrote, in a report for the Vera Institute of Justice, “America’s prisons are dangerously over-crowded, unnecessarily violent, excessively reliant on physical segregation, breeding grounds of infectious diseases, lacking in meaningful programs for inmates and staffed by underpaid and under-trained guards in a culture that promotes abuse.” Friends, we must spread the word. What you are achieving here at Sing Sing can help change our nation!

As you receive your degrees, let me raise one other significant point. Politicians pay more attention to those who do vote than those who do not, and your voices and those of your families should be heard on two important issues: “felon disenfranchisement” and the role of the private, for-profit prison industry.

Voting restrictions are a state-by-state issue, with some states like Vermont and Maine removing all limitations, while others make them permanent. National opinion is increasingly in favor of political liberalization and for the restoration of the formerly incarcerated of economic, social, and education opportunities such as Pell grants; and this should be encouraged.

The private, for-profit prison industry today runs 130 private prisons containing 157,000 beds, with some 6% of all state prisoners and 16% of federal prisons. They take in some $4 billion a year, with great profits. And they spend millions a year lobbying fiercely in support of candidates who favor longer minimum mandatory sentences, stricter anti-parole regulations, more and longer imprisonment of anyone for any reason. Where do you stand? Your voices, and those of your families and friends, must be heard!

In closing, let me reinforce two key messages that the Theological Seminary has tried to convey to you. You seen by the outside world as thoughtful, caring, educated individuals, and you should consider your activities—whether in the ministry, teaching, or social work–not as a job, but as a vocation—a “calling” to grow your full height and to be all that you can be.

And should you seek an appropriate thought from Scripture, let it be your personal answer to the biblical question, “Am I my brother’s keeper?”

We are all our brothers’ keepers; and we should not rest until our flawed prison system is reformed.

No Replies to "DANIEL ROSE ON U.S. CRIMINAL JUSTICE REFORM"